Casa La Juanica, asparagus with poached eggs and “The almadieros” 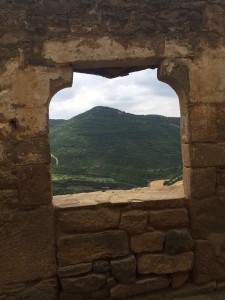 At the end of the 60’s, the people of Gallipienzo began to refer to it as “ancient” and its depopulation was imminent. The construction of New Gallipienzo was finished and Casa La Juanica received a demolition order. A meeting place for generations, the Juanica closed its doors and the town lost its tavern, the only one it had ever known. It was even frequented by Reyes and Txema and their descendants. Meetings from locals and foreigners look place in the tavern including people such as engineers from the mountains and the interior, the dentist who came just once a week, transport workers, the bus driver, the judge, the registrar and the notary – an endless list of characters who, throughout the ages, came to the village to provide services for almost a thousand souls and more than 120 houses. But there was also a very special group of people. A group of faithful visitors to Casa La Juanica. A group of men whose trade brought them down the river from the valleys of Roncal and Salazar to Gallipienzo. After tasting the famous asparagus with poached eggs from the tavern, they continued downriver to the Carcastllo pier, where some finished their journey while others continued on towards the Ebro where they would arrive on their rafts to the delta of the Mediterranean. With a degree of nostalgia, our friend Reyes remembers Los Almadieros climbing the road to her grandmother’s house. 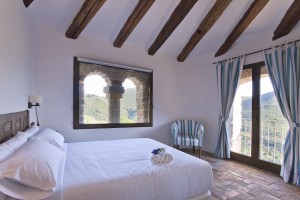 Today, little is left of Casa La Juanica. However, one of the windows facing the road still stands, ever vigilant, as if waiting to see the Roncalses and Salacencos arrive once more at the curve in the road. These early navigators inspired the name of one of the rooms of the Heredad Beragu Hotel: Los Almadieros. The asparagus with poached eggs, just as La Juanica cooked them, have been included in our current menu for our guests to try. And why not? Because through such flavours our guests can get to know a little more of our history.

This entry serves to pay homage to those who were before us and whose legacy we wish to preserve.